America’s fiscal path is not sustainable. Our national debt is already $30.2 trillion. In just over a decade, interest on the national debt will become the third largest federal “program.”

There’s one undeniable fact: A brighter economic future for the next generation means addressing our unsustainable national debt. Charting a better course for a sustainable fiscal future isn’t a partisan issue – it’s a matter of basic math.

Just how serious is the fiscal challenge we face? Our federal government is running a deficit, annually spending more than it receives in revenue. To make up for this, the United States borrows money, adding to federal debt. The national debt is currently $30.2 trillion – already the highest level as a percentage of gross domestic product (GDP) since 1946. The non-partisan Congressional Budget Office projects that in 30 years, federal debt held by the public will climb to 202 percent of GDP – more than twice our country’s entire economic output in one year. These are dangerously high levels of debt that threaten the economy we will inherit. 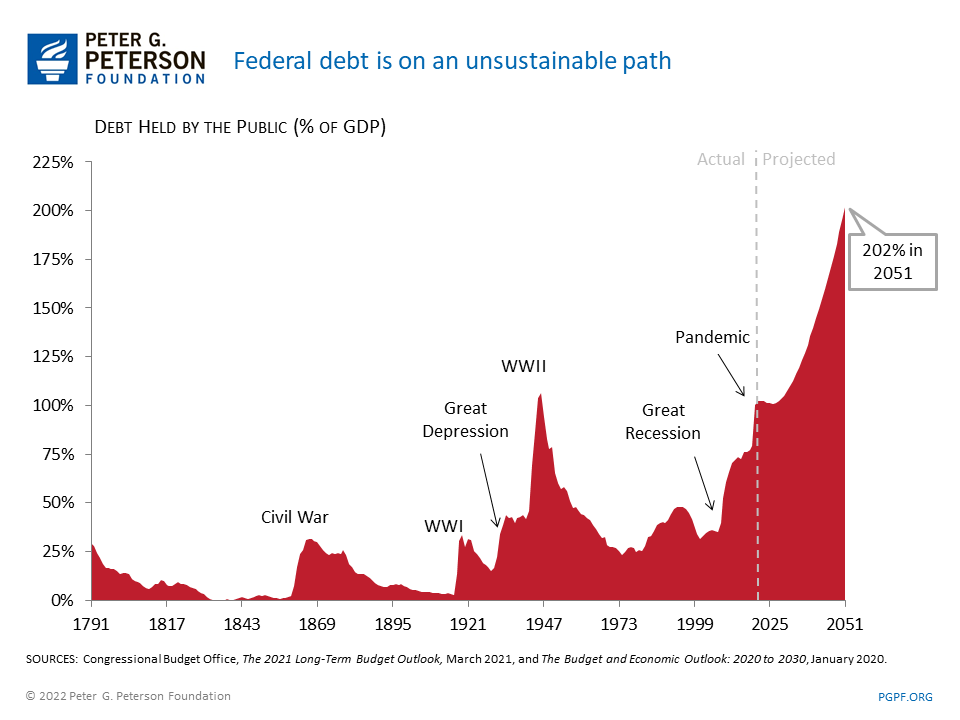 If we fail to address our national debt, rising interest costs could crowd out investments in areas like education, research and development, and infrastructure. Additionally our high and rising debt will absorb funds that might otherwise be invested in new factories or technology. This could slow economic growth and personal income growth over time.

Furthermore, younger generations will be the ones that get stuck with most of the bill. After all, today’s students will be tomorrow’s workers – and eventually, retirees. They will face the higher tax burdens needed to fund the government and its interest payment obligations. And if we fail to make our retirement programs financially sustainable for the long term, future benefits may not be adequate for future generations.

Through Up to Us, the next generation can get loud and be heard about how this issue affects them and what their generation can do to have a voice in raising awareness of our long-term fiscal and economic challenges.