The good news is that there are many solutions right in front of us.

Budget experts across the political spectrum have devised specific policy proposals to tackle our long-term fiscal challenges – underscoring that there are multiple pathways to putting our nation’s debt on a sustainable course to ensure long-term prosperity, growth, and opportunity.

For example, the American Action Forum’s proposal called for slowing the growth of entitlement spending by replacing Medicare with a premium support program, fostering competitive bidding in Medicaid, and raising the retirement age for Social Security. The plan would replace the income tax system with a progressive consumption tax and raise additional revenues through comprehensive immigration reform.

The American Enterprise Institute called for converting Medicare into a premium support program and Medicaid into a block grant to the states, slowly replacing the Social Security program with a flat benefit supplemented by private retirement accounts, gradually increasing the eligibility age for Social Security and Medicare, while increasing defense spending. On the revenue side, AEI proposes to replace the income tax system with a progressive consumption tax, impose a carbon tax, and raise the gas tax.

The Center for American Progress formulated a plan to slow the growth of healthcare spending by imposing stricter cost controls, while increasing spending on low-income people, infrastructure, and education and reducing defense spending.  The plan would also raise revenue with additional taxes on high-income people, a carbon tax, higher gas taxes, and immigration reform.

Finally, the Economic Policy Institute proposed a sharp and sustained boost in nondefense spending on infrastructure, education, training, and income support programs, while creating a public health insurance option. To pay for those changes and put the budget on a sustainable path, EPI proposed stricter health care cost controls, reductions in defense spending, tax hikes on the wealthy, imposition of a carbon tax, fees on big banks, and a higher gas tax.

Each organization’s proposal significantly reduced projected debt levels over the next two decades, effectively stabilizing the debt and putting the nation on a sustainable fiscal path. 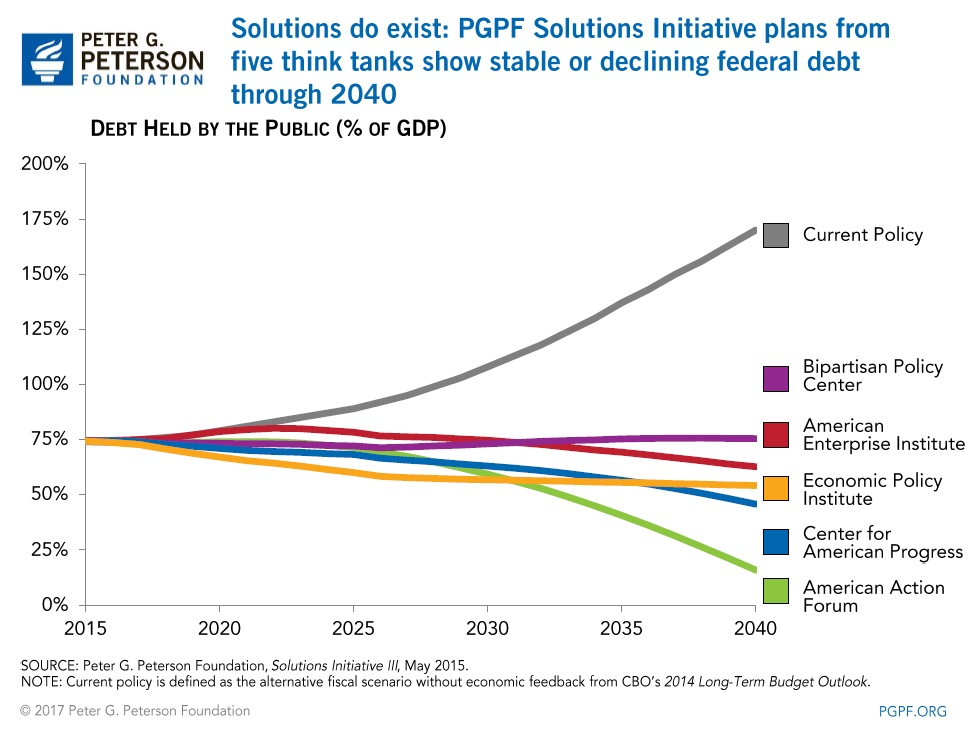 Interested in a deeper dive? Play the Fiscal Ship, a project of the Brookings Institution’s Hutchins Center on Fiscal & Monetary Policy and the Wilson Center, and see how your policy preferences would affect our debt outlook. To learn more about how specific policy areas relate to the national debt, check out the resources below.

Learn more about the structure of the U.S. tax system and tax breaks with these explanations from the Peterson Foundation. For analysis and commentary on current tax policy issues, check out the Tax Policy Center, a joint project between the Urban Institute and Brookings Institution.

The Committee for a Responsible Federal Budget offers a tool that shows you how old you will be when the Social Security trust fund runs out and calculates the projected losses in lifetime benefits, if we continue on the current policy course. Their Reformer tool then lets you take a crack at putting the fund on track by adjusting benefits and taxes. Learn more about policy options by checking out the Bipartisan Policy Center’s report on retirement security.

Rising healthcare costs are one of the primary drivers of government spending. The American healthcare system is complex, but the Kaiser Family Foundation provides timely analysis and polling on the policy options that legislators are currently considering.

The Stimson Center, with the support of the Peterson Foundation, convened former military and diplomatic officials to develop a set of fiscally responsible policy options that would maintain our vital national security. In addition, the bipartisan Coalition for Fiscal and National Security released a statement connecting America’s national security to a strong fiscal foundation. For timely commentary on fiscal policy and national security, check out the Bipartisan Policy Center’s blog on the defense budget.