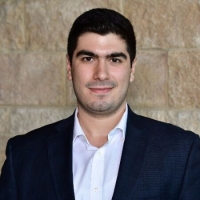 George Batah is a New York based consultant and humanitarian activist. During his senior year at the Illinois Institute of Technology, George led his team to place in the Top 3 of the national Up to Us Competition among 22 participating schools. George’s Up to Us campaign convened multiple campus offices and students organizations for one mission, including the Office of the President, the Office of External Affairs, the Office of Marketing and Communications, the Stuart School of Business, the Undergraduate Business Council, Engineers without Borders, and the Student Government Association, among others. His campaign boasted classroom presentations, a “Debt vs. Ethics” panel, and a round table discussion with US Congressman Bill Foster. George’s participation in Up to Us was only the beginning of his involvement with education and activism. In 2015, he created a petition to increase the number of Syrian refugees to enter the United States and received over 300,000 signatures, resulting in real policy change to allow more refugees and an invitation to the White House. After this, he went on to co-found the “Syrian Youth Empowerment,” an organization to help Syrian high school students secure scholarships for college. The organization has helped secure admissions and full scholarships for Syrian students to attend Harvard, Stanford, MIT, Columbia, Duke, Brown and others. More recently, George has been awarded IIE Global Changemaker Award and has been named a Schwarzman Scholar, a Global Shaper by the World Economic Forum and a representative to the 2017 UN Social and Economic Council Youth Forum.