The US is Accelerating its Borrowing in Response to COVID-19

Individuals, corporations, and the economy have all been impacted by the COVID-19 pandemic. To help support Americans, small businesses, and the economy, the federal government has enacted four pieces of legislation that approves the spending of trillions of dollars. The Treasury Department has accelerated its borrowing to begin financing these legislative pieces. 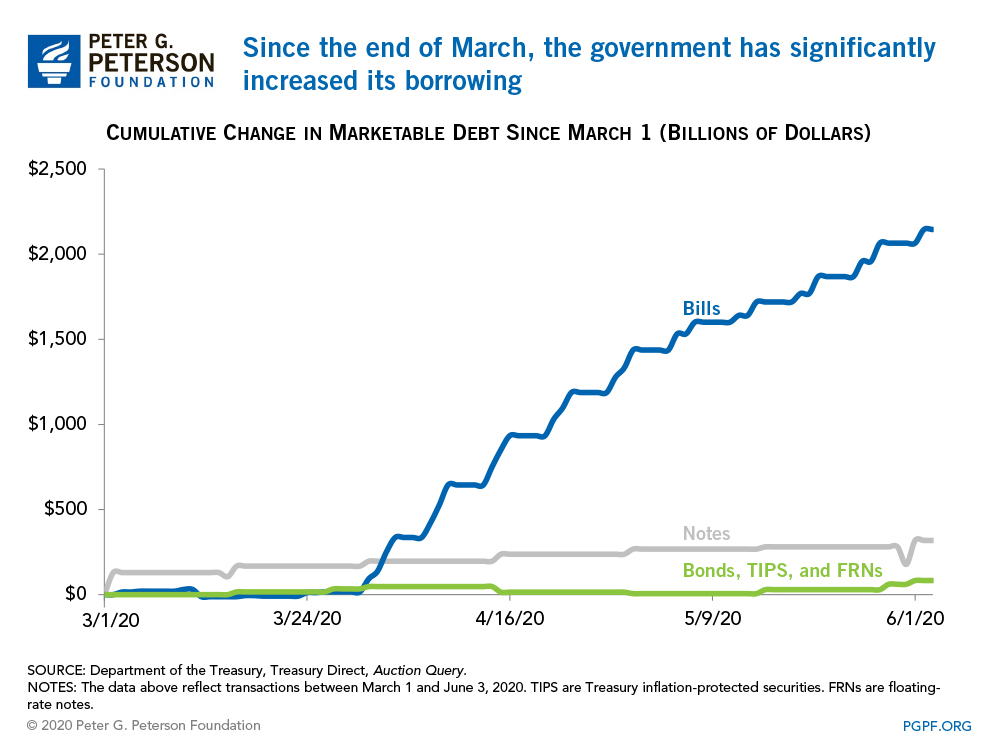 How much has borrowing risen?

Treasury borrowing has risen by $2.5 trillion since the beginning of March. A large portion of that increase actually occurred since March 30, just after the largest piece of relief legislation, the CARES Act, was enacted.

How is new debt issued?

The U.S. Treasury offers marketable securities which are sold at auction in various maturities and traded on secondary markets. At the end of fiscal year 2019, these securities represented 97 percent of all debt held by the public.

As the economic toll of the pandemic became clear, interest rates for new Treasury bills were dropped. Therefore the government is paying considerably less interest on the bills issued after March 1, compared with those issued before the start of the pandemic.

What will happen next?

During the next few months, we will continue to see federal borrowing increase rapidly. The Treasury Department projected that it will borrow $3 trillion during the quarter that runs from April through June and an additional $677 billion from July through September.

Stimulus money continues to be spent in the hopes that the economy will bounce back from the economic effects from the COVID-19 pandemic. This relief response has been possible because the Treasury Department has been able to quickly raise the funds combined with low-interest rates. The focus right now continues to be supporting individuals and businesses to survive and eventually rebound from this crisis. However, when the situation stabilizes, we must again focus on the country’s underlying fiscal situation, to ensure a strong fiscal future.

At Up to Us, we continue to engage the next generation of leaders on the importance of addressing the country's current and future fiscal challenges. Get involved by signing the Up to Us Pledge to let your representatives know that a fiscally sound future is important to our generation!