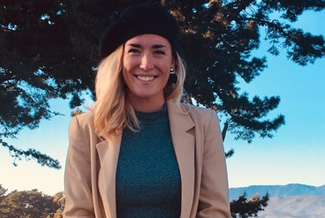 From her first introduction to Up to Us at the University of Illinois at Urbana-Champaign to her current role managing the Up to Us Campus Competition as a Senior Associate of Programs at Net Impact, Hilary Allen has spent more than three years mobilizing the next generation of leaders on the importance of addressing the country’s fiscal challenges. We sat down with Hilary to ask about her experience with Up to Us as she steps into her new role as an Up to Us spokesperson, serving as a voice for this movement of young leaders.

What inspired you to get involved with Up to Us?

Entering my senior year of college at the University of Illinois at Urbana-Champaign, a friend of mine introduced me to Up to Us. The leadership opportunity coupled with the fact that it was nonpartisan was really motivating for me, as I had just been elected President of another nonpartisan group on campus - the League of Women Voters Student Chapter. After learning that Up to Us would allow me to interact with other emerging leaders across the country while addressing an underrepresented issue in the national political conversation, I was in.

How was your experience as an Up to Us student leader?

In 2015, I served as my university’s campaign leader, working with a team of five other students and partnering with multiple campus organizations to host activities centered on voter registration and National Debt education. Our team ranked in the top 20, which gave me the opportunity to attend the Clinton Global Initiative University (CGI U) meeting at the University of California, Berkeley. Going to CGI U was the apex of my Up to Us experience. Not only was I able to reconnect with the other program participants who I had met throughout the program, but I also became exposed to a broader world of young people who, like me, were also working to tackle our generation’s toughest problems. It was really motivating for me, both professionally and personally.

When did you first realize the impact Up to Us can have?

As a student leader, I was able to attend the 2015 Net Impact Conference. I will never forget a breakout session with Daniel Lubetzsky, the Founder and CEO of KIND bars. It was just before the 2016 election, and we had a great discussion about political polarization in our country. He talked about this concept of being a radical moderate, and how we should strive to break away from limiting labels or dogmas that prevent us from empathizing with people whose views are different than our own. It was so inspiring to me, and as more time passes, it continues to resonate with me about the impact Up to Us can have.

How has your role with Up to Us grown over the years? 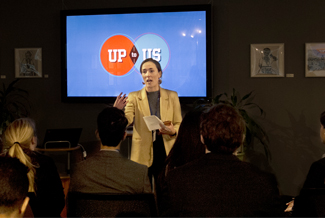 After securing one of two paid internships (another prize, open to top performers of the Campus Competition) at Net Impact in the summer of 2016, I was recruited to make the ultimate transition from student leader to FTE, serving as Program Associate for the organization. This felt like a natural progression to start my career because it allowed me to continue building on my leadership experience and work with the program that offered me so many opportunities. I currently serve as the Senior Associate of Programs, designing and managing Up to Us, with a focus on community management. I work to streamline systems and processes and deliver educational and motivational content to our emerging student leaders. I continue to be motivated by the amazing young leaders of Up to Us, with their creativity and drive for making the world a better place, and who embody the core principles of Up to Us: bipartisan collaboration, viewpoint diversity, and respectful civil dialogue.

Why is the national debt an important issue for young people?

The economic health of the country will have major implications on our generation’s future, but it is often not the first thing that comes to mind when we’re thinking about policy issues. Today, the national debt is $21.7 trillion and growing, threatening the economy that we will inherit. According to the latest projections from the Congressional Budget Office, federal debt held by the public is currently at its highest level since shortly after World War II, and the cost of paying interest on the national debt could soon become one of the largest “programs” in the federal budget.  This means that it will be harder for the government to invest in any number of other priorities that we are passionate about – like education, infrastructure or climate change. The long-term ramifications of the national debt will impact Democrats, Independents, and Republicans equally, so this is an issue that should resonate with everyone, but particularly young people.

I’ve met so many diverse, motivated young leaders committed to working toward a better economic future through Up to Us, that I know our generation can be part of the solution. In an age of increasing polarization, I’m proud to work with a nonpartisan movement of young people who believe that there are no sides, only solutions to the national debt.

What are the next steps for young people who want to get involved and learn more about building a sustainable fiscal and economic future?

Get involved, today! Young people should engage their networks, friends, and family to share their concerns about America’s long-term fiscal outlook and how it will impact our future economic opportunities. College students can learn more about joining the Up to Us Campus Competition or hosting an event on campus by visiting our website, and everyone can take the Up to Us Pledge to show your commitment to raising awareness and urging your elected representatives to act on these critical issues.

Members of the press looking to connect with Hilary or to learn more about the Up to Us movement can contact: uptous@finnpartners.com.