Americans are worried about the increased costs associated with healthcare. Health insurance premiums are high and typically come with high deductibles and co-pays. The cost of medications continues to rise as well.

Even after the current COVID-19 pandemic eases, it's safe to say healthcare will be a big concern for voters in the months leading up to Election Day.

In March 2020, a Financial Times poll found that 34% of voters see the high cost of healthcare as the largest threat to the U.S. economy. This number is up from 26% just five months ago. Financial Times also reported that March's Super Tuesday exit polls showed healthcare was the biggest single issue for voters in those five states. 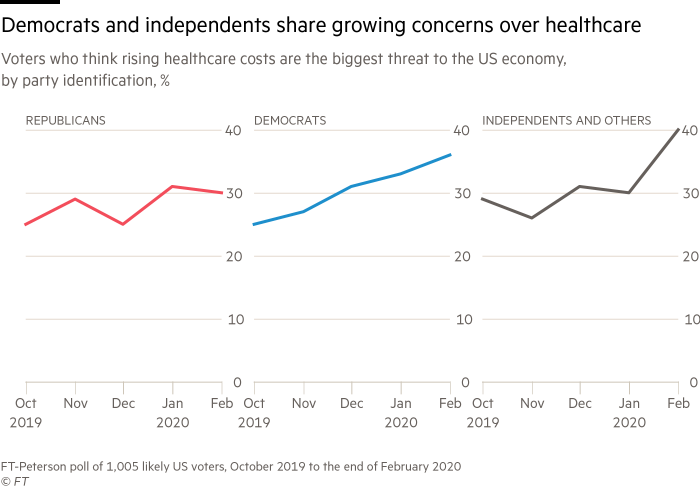 How politicians would handle the issue varies greatly. Among the Democratic candidates, plans for Medicare for All (compulsory for all) and public option plans (a choice between public and private insurance) are at the forefront. The Republican side of the aisle continues to promote private market options with less governmental involvement.

Healthcare concerns over the decades

Healthcare has been a central topic since World War II, but the HIV/AIDS epidemic during the late 1980s and early 1990s pushed it front and center. In the 1990s, the Clinton administration tried to revamp the healthcare system and, with each subsequent administration, the issue remains important to voters.

As employer-sponsored healthcare plans rapidly deteriorate and healthcare costs continuously rise, the coverage and costs associated with healthcare have been a focus of every election since. The most significant change came with the passage of the Affordable Care Act in 2010.

The costs associated with healthcare are continuously rising, but the quality of care isn't necessarily better. The Peter G. Peterson Foundation estimates the U.S. spends twice the average on healthcare when contrasted with other developed countries. Furthermore, the U.S. Department of Health and Human Services says healthcare now accounts for almost 18% of the U.S. economy.

Dallas News reports on a study that found 34% of healthcare expenses can be attributed to administrative costs. Doctors are increasingly taking the brunt of the blame, indicating they don't have much control in a situation where insurance and other factors set the costs of care. Yet, other data contradicts this, pointing to hospitals (33%) and professional services (26%) as the source of high prices that raise costs for Americans.

It'll be up to voters to do the research, listen to candidates and cast their votes for the candidate they believe can best fix the significant problems associated with the U.S. healthcare system.

As the total impact of the coronavirus pandemic, its health effects in the U.S. and its economic fallout have yet to unfold, there's little doubt that healthcare will be the main focus in November 2020.

With the 2020 election coming up, it is important that we are informed on how our votes can shape our future. Check out the 2020 Election page to learn more about fiscal issues, voter registration, and how to get involved with this year's election. Up to Us, a leadership development program for young adults, focuses on how they can take action to achieve a fiscally sound future for the U.S. To learn more, visit www.itsuptous.org.