Over the past six years, My Two Cents Day or #MTCD, has become an opportunity for teams to flex their creativity, work with campus partners, leverage their campus culture, and empower their peers to stand with them in support of the Up to Us movement by attending an event, signing the pledge, or working alongside them to raise awareness.

This year, more than 50 teams brought their My Two Cents Day campaigns to life in the month of November with the goal to educate and engage their peers on addressing barriers to securing our future fiscal opportunities. While the events and activities varied by campus, together, teams engaged 10,713 people, live, during their events and collected 13,164 signatures on the Up to Us pledge.

The team from American University was very aware that their campus tends to be politically charged and wanted to find a way to bring people together. They did that by hosting a screening of a documentary outlining the shape and impact of the national debt. After the screening, they invited viewers to engage in a discussion about the film and current events facilitated by professors from Kogod School of Business and the Black Alumni Association.

Oakland Community College capitalized on the popularity of the Game of Thrones television series and the proximity of MTCD to Halloween in order to make their activities fun, engaging and relevant to their audience. With five distinct mini-events, ranging from “White Walkers and the Walking Debt” to “Get the Budget on Target” (complete with an archery range) their team was able to engage close to 150 students.

Using fun piñatas as a way to catch people’s attention, the team from Ohio Northern University gave “swings” away based on the engagement visitors had with their event. Visitors earned one swing for chatting about Up to Us and our nation’s current fiscal and economic landscape, a second swing for signing the pledge and a third swing for answering a trivia question. They had so much engagement, they ran out of piñatas and had to get more!

In the weeks leading up to their trivia event, the team at Drew University displayed facts about the national debt in high traffic areas around campus. On the day of their My Two Cents Day event, they laid out a “bubble wrap carpet” where students could “win” a chance to walk the carpet for answering questions correctly. Everyone was pleasantly surprised to learn the facts they had been seeing for the last few weeks had prepared them to answer questions on the national debt.

Mesa Community College gave each visitor two pennies and encouraged their peers to place their “2 cents” into a corresponding vase that highlighted the major spending categories for the government (defense, education, Medicare, etc.) to symbolize what category was most important to them. From there, the team members were able to engage visitors in a conversation around an area that they cared about and discuss how spending is currently divided and the impact an unsustainable economic future could have on funding for their priorities.

Up to Us provides emerging leaders a platform for facilitating a collaborative dialogue on the country’s most vexing challenges. Campus Competition teams will round out their campaigns by hosting a second “Wildcard” event on campus in the coming weeks, with a goal to bring deeper engagement and continued conversation around this important topic to their campus.

Want to be a part of the Campus Competition? There is still time to join the winter cohort, apply here. 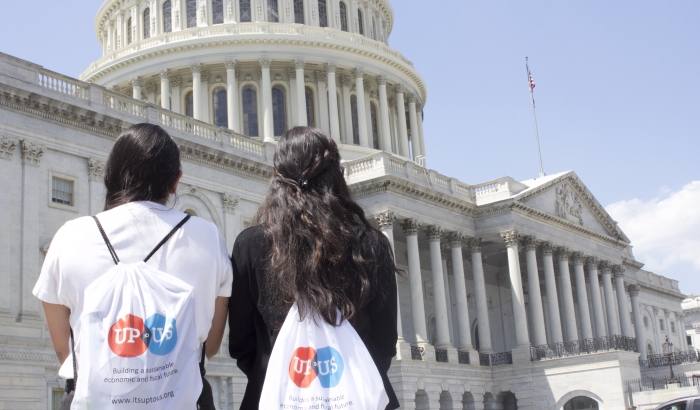