Community Contributors: How Would Masanue Vah Use the National Debt Interest

The Up to Us community is full of young, bright leaders who have a vision of change for the future. On the prompt: Right now, $389 billion dollars in interest is paid on the national debt. Given current global events, how would you decide to invest those funds and why?, Masanue Vah explains how funding education can be life changing and provide more opportunities for success across the country. 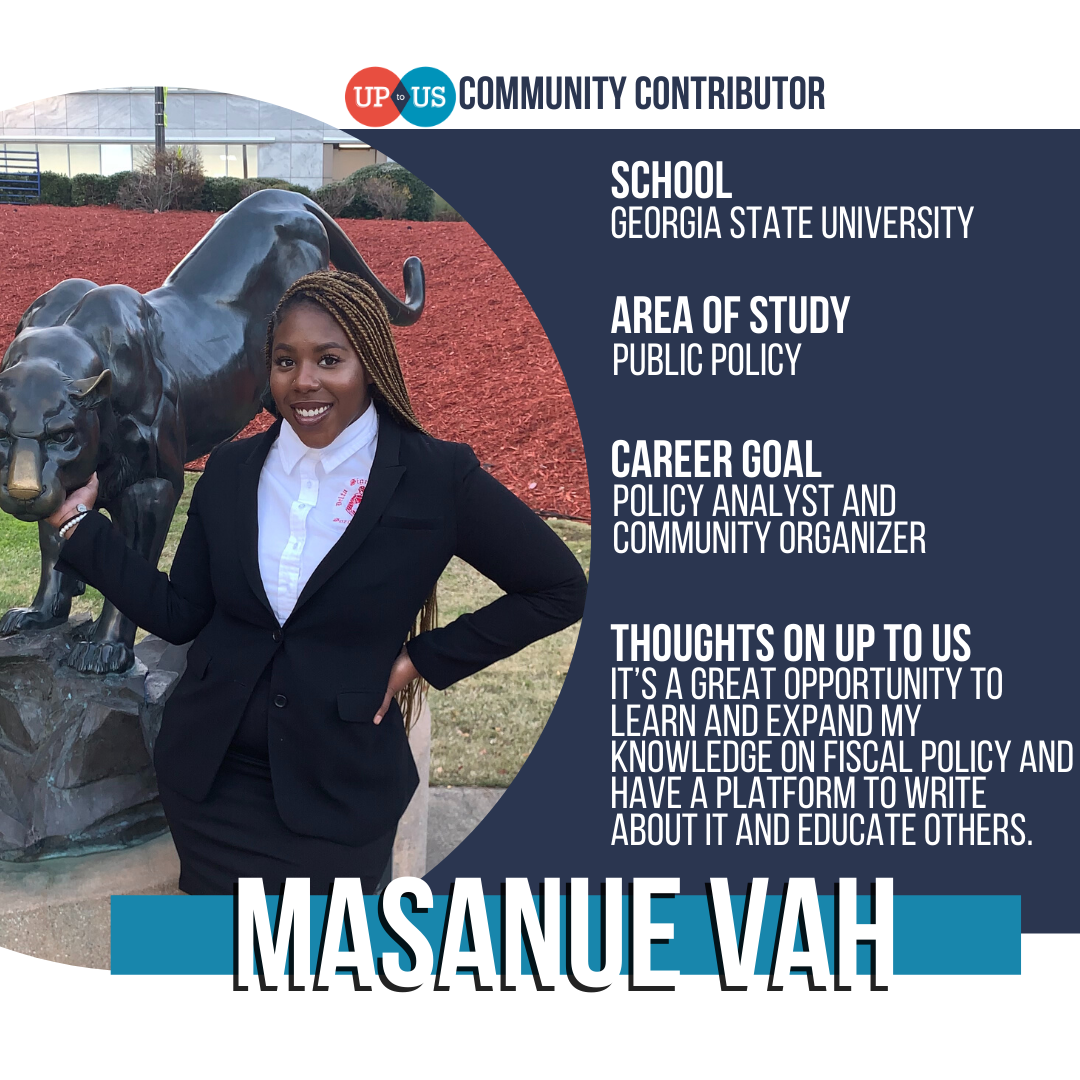 Education is a major determining factor for the standard of living in many countries. A chance at an education is a chance for many to build a stable future. However, the U.S. is facing a major issue within education reform. Currently, many students are not receiving quality educational resources. This has led to an excessive number of students not graduating from high school. During the 2018-2019 academic year, there was an estimate of 15.3 million students enrolled in high school. The national graduation rate is 84.6%, but there are many states that fall well below this average, meaning millions of students across the country will not graduate from high school.

This problem is intensified by the fact that it primarily affects minority and low-income communities. These social groups are disproportionately affected by budget cuts, teacher disengagement, and lack of educational development. Arizona is one of the most diverse states with almost 50% of its population being non-white minorities, yet it is also ranked as one of the lowest in the public education system. The Girls Leadership Academy of Arizona, which consists of a minority population of 96%, is the lowest-scoring high school in its county with a graduation rate of less than 20%.

Low graduation rates have a detrimental impact on the social and economic success of low-income neighborhoods. People without a high school diploma (or any equivalent) are unable to continue with any post-secondary education. This, in turn, closes them off from many positions within the job market. According to a report from Georgetown University, 35% of  jobs will require at least a bachelor’s degree, 30% will require some college, and 36% will not require education past high school. Students who do not graduate from high school are paid far less than those who do; they are also denied access to high salary positions. Many are left to choose from low paying jobs that do not offer a living wage, which in turn leaves them trapped in a cycle of poverty. Due to this, high school dropouts are also more likely to be poor and “suffer from a variety of adverse health outcomes”. This cycle further disenfranchises them within the social and economic systems of the United States.

Despite these educational disparities, there are ways to mitigate these issues. Studies on graduation rates have shown that variables such as ACT scores, teacher salary, and average funding per student are positively correlated with graduation rates, while variables such as poverty rate correlate negatively. Even with studies showing the positive relationships between educational spending and performance, funds still continue to be cut. In 2018, the federal government spent $67.9 billion on education; however, in the 2019 budget summary the request for funding decreased 12% totalling $59.9 billion. Investing the $389 billion of interest from the national debt back into education can make a number of positive changes for students.

Many states score way below the national ACT score of 20.7. Mississippi, the poorest state in the country, is among those that produce low ACT scores correlating with low graduation rates. Low-income school districts across the country are not spending enough to reach the national ACT average. States like Mississippi would need to spend upwards of $15,000 more than what they are currently spending to bring the current score up to the national average. Low-income school districts would also have to spend 3 times as much compared to wealthier districts just to get the same results.

Rather than cutting funds, the nation could easily triple educational spending to $180 billion. With this amount, the federal government can implement new initiatives, fund more programs, and make drastic improvements to the entire education system. School districts would be able to provide after school programs for ACT and SAT Prep, as well as provide new software, educational subscriptions, and technology that will aid in educational development through graduation. The remaining $209 billion of interest can be implemented towards increasing teacher salary, ultimately closing the teacher pay gap. Increased teacher salaries allow for teachers to invest more time and energy into their students, leading to improved performance.

Utilizing the $389 billion in interest can ensure higher test scores, a dedicated workforce, and quality resources that deliver higher graduation rates and increase the socioeconomic success of low-income, minority students. Education is the foundation of our country therefore it is imperative we take accountability in investing in the youth now, so they can succeed in the future.