We asked the Up to Us community to answer the question: How would you use the $389 billion currently being used to pay off the national debt? Here's Evan Malbrough's answer on how those funds could be used to combat important issues in our country like homelessness, democracy, and clean water. 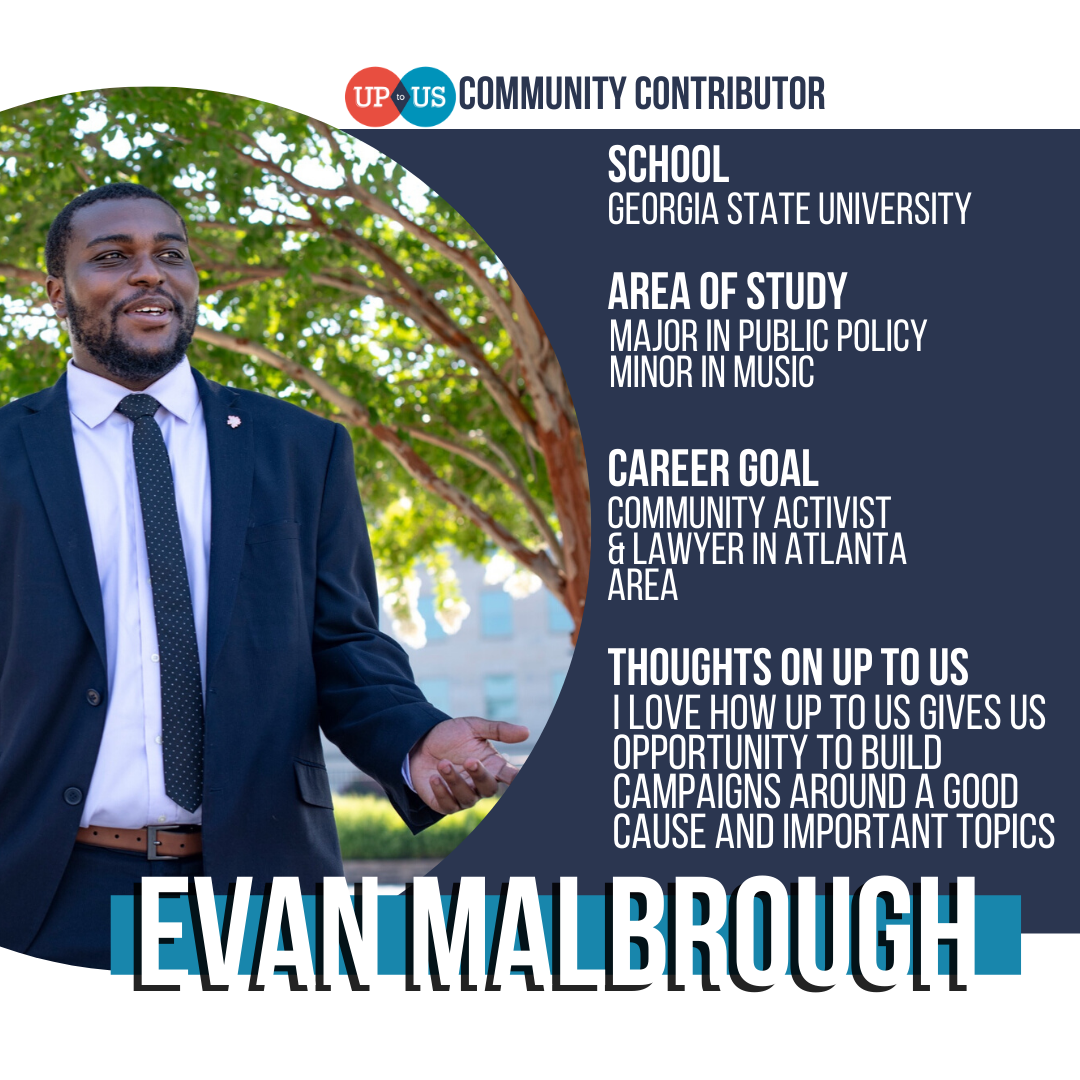 Right now, the United States spends $389 billion dollars in interest payments on the national debt. This money is too essential to be spent on the interest of a bill. Many Americans are experiencing homelessness and are in danger of continuing in that state unless the federal government provides assistance. The national Alliance to End Homelessness reports that the Department of Housing and Urban Development spent $2.777 billion in fiscal year (FY) 2020 in grants to tackle homelsness. If the United States Government took .007% of the interest off of the national debt and put it towards these programs, the budget would double.

In January 2018, The Council of Economic Advisors released a report on homelessness in the United States. The CEA’s reports that, 552,830 people were counted as homeless in the United States. These half a million people are as diverse as the country itself. In many ways homelessness is an equalizer of people. Amongst those homeless are fathers, mothers, children, veterans, those with college degrees, and those who never finished highschool. A major segment of the population that experiences homelessness also are dealing with severe mental health issues and don't have the means to manage them.

An effective use of the doubled homeless aid budget would be implementing and expanding a “Housing first” model nationwide. Housing first is a program which builds on the success of permanent supportive housing. The Coalition for the Homeless states that the “housing first” approach involves “moving long-term individuals experiencing  street homeless  — the majority of whom are living with mental illness, substance abuse disorders and other serious health problems — directly into subsidized housing and then linking them to support services, either on-site or in the community.” This practice was conceived and implemented in the state of New York and has shown great results. Individuals who participated were able to remain housed and saw massive improvements in their mental health.

Another effective way to use the money would be taking measures to prevent homelessness. One way to do this is by increasing targeted assistance to homeowners and renters. Targeted assistance includes practices like financial assistance to residents struggling to maintain housing, mediation and diversion of eviction proceedings, legal assistance, employment services, or other supports. These services will be rendered by government entities along with religious and non profit entities. The strengthening of these institutions would lend needed support to those who are not experiencing homelessness but are at high risk. These risk factors are assessed by “Housing Status Assessments” which is a survey provided by the Office of Health and Human Services. According to HHS, the Housing Status Assessment evaluates whether or not a person or family in a household can maintain safe housing in the near future. Tools like these are essential in creating a system that both reduces active homelessness while at the same time preventing growth in the homeless population.

To quote Nelson Mandela: “Overcoming poverty is not a gesture of charity. It is an act of justice. It is the protection of a fundamental human right, the right to dignity and a decent life. While poverty persists, there is no true freedom.”. We have the largest economy in history and the interest on our national debt is hundreds of times the money we need to fix it. If we managed our debt responsibly we could effectively end homelessness in our great country. Every person in the United States has a home, it is just the responsibility of us all to give them the keys.

Expanding democracy and decreasing the national debt go hand in hand. The current national debt is $389 billion. This money could be used to help secure our democracy, create jobs, and get young people involved. For $120 million, the United States could establish a national election worker program to increase the number of young (18-29) working. The Covid 19 Crisis has severely impacted our economy and our democracy and a national election worker program could be a fix.

The Covid 19 crisis has put massive stress on our election system. Many poll workers fear working elections due to fear of disease spread. The U.S. Election Assistance Commission reports that almost 77% of poll workers in the United States are over the age of 61. The commission also states that “nearly 65% of jurisdictions reported that it was ‘very difficult’ or ‘somewhat difficult’ to obtain a sufficient number of poll workers.” These challenges have been augmented by COVID-19 where elderly people are at the highest risk of death. One example we are seeing is Wisconsin. Wisconsin Govern decided to have an election during a global pandemic and national emergency. This led to a significant decline in poll workers in the area. In an interview with News Week, Albrecht said that the city of Milwaukee (Alone) had  “400 election workers on April 7, compared to the typical 2,000 election workers to staff the 180 sites for a presidential primary.” This led to long lines and increased the possibility of disease spread. Wisconsin is yet another example on why we need to diversify our national election staff.

Compared to $389 billion, a national election worker program would not cost that much. For $120 million, the federal government could create a matching grant program for states and election offices to hire young people to work the polls. With $120 million, the federal government could incentivize the 50 states to hire 80,000 election workers with $1500 per worker. This would create quick jobs and teach 80,000 young people the importance of democracy first hand.

Young people (18-29), especially those who are college age, would learn faster than their older counterparts. This would reduce training costs for election offices across the country. This would also allow states to modernize their election system knowing they have a younger workforce able to quickly adjust to the new technology.

Franklin D. Roosevelt once said “Democracy alone, of all forms of government, enlists the full force of men's enlightened will.”It is time for our generation to provide that will.  A national election worker program would also be a way to rebuild the economy during a recession. In a democracy, election workers will always be needed and young people will always need jobs. The Bureau of Labor Statistics reports in March 701,000 people lost their jobs. Once the country wide stay at home orders are lifted many low skill and low wage employees will return to work but many will still find themselves out of work. 80,000 young election workers would be able to offset unemployment numbers through December 2020. Trained and certified poll workers will also be able to work future local and municipal elections.

This program would also be a launching pad for changing how we do elections. Many states have started to modernize their election technology to increase safety and efficiency. A younger election staff could allow states to take bigger leaps in modernization because they would have staff people that are technologically literate learning and working the new machines. Gen Z and Millennials have been raised around this technology and can adapt easily.

Our democracy is the cornerstone of our country. It is important that we do all we can to ensure that it is safe, open, and fair for every American Citizen. We should lower the national debt because then we would have more funds to strengthen that cornstone as well as employ the new generation of civil servants.

In Debt to Water

​Water is essential to human life as well as society. For centuries, nations have been dependent on water sources to sustain and grow. In the present day, 99% of people in the United States have access to water. Where we falter, is access to lead free and safe water. This is because our country has not been able to pass a large scale infrastructure package that includes revamping our 100 year old water system. This lack of action has led to thousands of children in our country suffering from lead poisoning which has irreversible effects on development. The $389 billion we spend on interest on the national debt could be the key to clean water for everyone in our nation.

In 2014, Flint Michigan experienced one of the worst infrastructural catastrophes in the history of our country. When the government of Flint decided to stitch their water sources from Detroit to the Flint River, they ended up exposing the population to dangerously high levels of lead due to pipe corrosion. This decision made national news because the government was not able to respond quickly due to lack of infrastructure, resources, and political will. These shortcomings have permanently affected the residents of Flint for generations to come both physically but also emotionally. Many residents felt abandoned by their government both locally and nationally and have experienced deep trauma seeing their community torn apart. Flint was a horrible incident, but the issue it is still facing 5 years later is not isolated. Many communities in the United States are seeing high levels of lead in their water system and most are not even aware.

The Center for disease control states that there are no levels of leads that would be bearable for the human body. The National Library of Medicine states that Lead in the blood system of humans causes health issues like increased blood pressure and causes infertility, nerve disorders, and muscle and joints. In children, lead can cause anemia, severe stomach ache, muscle weakness, and brain damage. These diseases destroy lives and communities and can lead to lasting effects on a broader population. Exposure to lead has greatly decreased over the past 100 years but, many of our water systems have not been updated to get lead out of the water.

In The Atlantic article “The Trouble With America’s Water” it is stated that “between 2015 and 2018, about 5.5 million Americans in communities around the nation got their water from systems that exceeded the Environmental Protection Agency’s lead action level of 15 parts per billion” This means that 5.5 million Americans are drinking unsafe drinking water and suffering the effects of lead poisoning. This is a slow moving and quiet public health crisis that needs to be addressed.

Erik Olson with the Natural Resources Defense Council states that it would cost $30 billion to replace all lines that currently have lead in them. This $30 billion would not only save the lives of millions of Americans but also create years on construction jobs for those out of work. $30 billion is roughly 8% of the interest we spend on the national debt currently. This means that if we were to reduce the national debt we will have the opportunity to prioritize the safety of our country's water. As a nation we need to adopt efficient fiscal practices that promote the health and safety of our citizens.