Community Contributors: How Would Don Uy-Barreta Use the National Debt Interest

The Up to Us community is made up of more than just students raising awareness about the national debt - professors and faculty at these colleges and universities are also playing a large role in creating and advancing this dialogue. Don Uy-Barreta, professor of Economics at Hult International Business School, talks about how investments in human capital could change the world we live in. 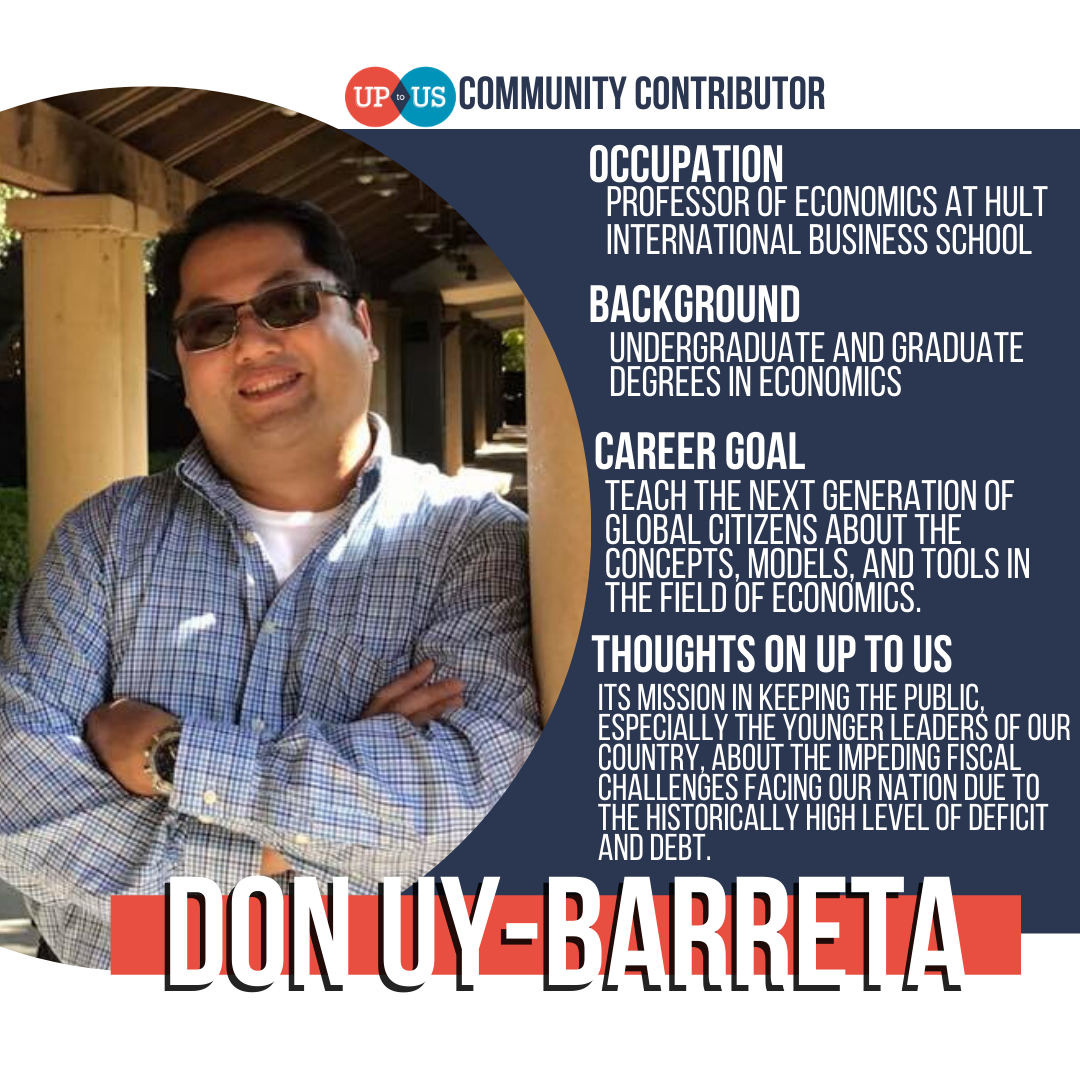 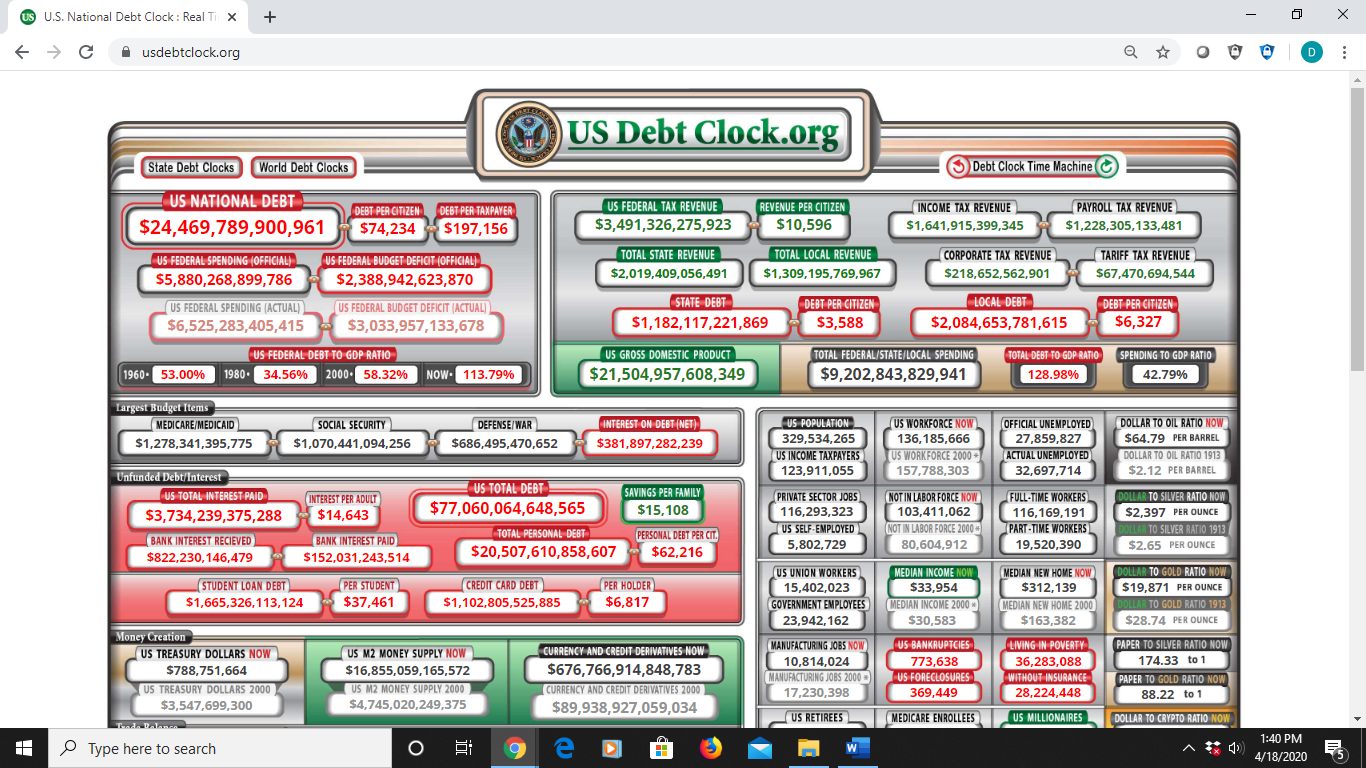 From this screen shot on April 18, 2020, the interest on debt is over $380 billion U.S. dollars. That amount is even larger than the Gross Domestic Product of many nations (i.e. Ecuador, Peru, and Bolivia). That interest on debt payment is large and could be funneled towards other activities which would lead to higher returns. In economics we are taught to be mindful of cost and benefit. Our goal is simple and that is to lower the cost and maximize the benefits. Such a simple concept but sadly not always considered. Not everyone is endeared with the powerful lessons of economics which could be part of the reason why this debt level and the interest paid on the debt has been sadly largely ignored and hence has risen to such high levels.

If I could funnel these interest payments elsewhere for more productive use then I would obviously choose to fund investment in human capital. I’ll just simply define human capital as composed of education, training, and health. A wonderful example of job training is Germany’s vocational system. But since we don’t have the same system here in the U.S. then I’ll just focus on higher education. A country could increase its productivity many ways. It could also invest in other forms of capital like machines, robotics, and such. However, who would manage those machines and robotics if we don’t have a qualified educated workforce. We wouldn’t even have machines and robotics if it weren’t for an educated society. We could also have a highly educated population but if they are sickly then no amount of education will get these individuals working productively. So again, human capital is key. In my opinion, investing directly in the subset of human capital, more specifically higher education is best. Education does yield the highest return for the individuals, the citizens, and the overall economy. Yes, I did say citizens which includes the individuals who may not have even pursued their higher education. How is that possible you ask? The easiest explanation is that education exhibits positive externalities. This means that there’s a spill-over effect. It positively affects even individuals who didn’t directly graduate from school. Just to be fair though there are also negative effects. For example, some individuals, due to higher competition for more productive workers, may experience job loss. However, in many varied measurements the positive effects clearly outweigh the costs for our society. As our society progresses many lost their jobs through automation however those workers displaced may have found better jobs elsewhere. Education leads to higher career mobility, better job prospects, and if that’s not convincing enough then we might as well add a net positive gain in income.

Now, let me concentrate on education a little bit more. Let’s take a look at Taiwan. Taiwan, many years ago, didn’t have much resources but investments in their educational system allowed them to propel well ahead of other countries rich in other resources. There are other policies which Taiwan also implemented but I would argue that their investment in education is by far the best and also far reaching. Human capital, more specifically education, yields the highest return, is more far reaching, and we already have the evidence that it works. Let’s do that instead! 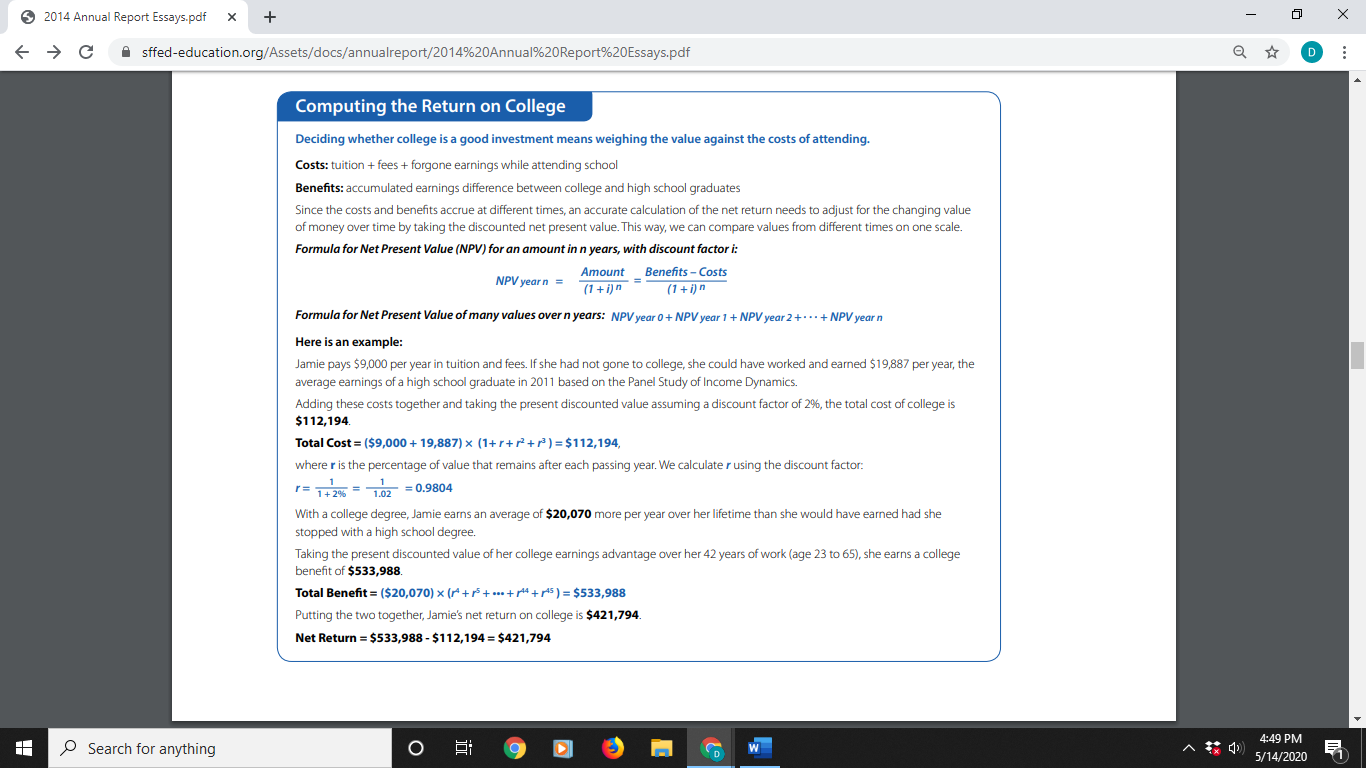