Fiscal Responsibility or Responsible Investing? A Reflection on the 10 Year Anniversary of Up to Us

As we look back on the past decade since Up to Us was founded, our program has plenty of accomplishments to celebrate. We’ve expanded our campus presence from a humble 10 universities in 2011 to over 100 today. We’ve hosted hundreds of events on campus to bring people together to discuss fiscal policy, our federal budget, and what we care about as the next generation of voters. Because of our efforts, thousands of young people possess a better understanding of our federal budget, the ramifications of our long-term national debt, and how to strike the balance between fiscal responsibility and addressing challenges through investment. In a world wrought with natural disasters due to climate change, inequality, and an aging population, the conversation couldn’t be more important and, unfortunately, more divided.

Here’s what I’ve learned about running a program about fiscal responsibility in the era of multiple - and popular - spending packages.

As is common with controversial issues these days, we see the media represent caricatured explanations that are vastly oversimplified and lack the necessary background context, nuance or factual information that is necessary to truly understand the full picture. Media coverage of our federal budget deficits and debt are no different. You’ll see talking heads and political figures speaking in hard numbers (billions and trillions!) instead of percentages of the budget, or comparisons to previous years after adjusted for inflation. I can tell I am already boring you. But this is the fact of the matter: In budget language, everything is relative- yet our communications around it are absolute.

It’s common to see our federal budget deficit and debt talked about in similar black and white terms in media representation: You’re either a deficit hawk and proclaiming the doom’s day when our federal debt will come due, or you subscribe to Modern Monetary Theory where a nation’s debt, as long as its issued in their own currency, is no object.

The truth lies of course somewhere in between. It’s true that our debt cannot grow indefinitely into the future without negative consequences. It’s true that the interest on our national debt costs American taxpayers over $1 billion per day. But consider this: It’s also true that our federal budget is disproportionately focused on end-of-life: we spend $7 for a person over the age of 65 for every $1 we spend for someone under 18. So yes, we need to address the national debt, and we need to do it in a way that invests in the next generation to produce the strongest economic growth to offset the investments we make.

Perhaps most important to understanding fiscal policy is not what it is but who decides it.

Fiscal Policy, as Bill Gale has pointed out is inherently political. Fiscal Policy (unlike its sister strategy of Monetary Policy) is decided by Congress, who of course are elected by us, the voters. And therein lies the rub: our elected officials’ incentive structure is all about responding to the voters, and in order to do that, they have to serve their constituency, which commonly means advocating for that juicy tax cut or new spending bill. In other words, the people in charge are rewarded for thinking in the short term while our federal budget erodes in the long term.

Some have argued that fiscal policy should be set by an independent body, but it’s very unlikely that the role of fiscal policy will change anytime soon. In the meantime, Up to Us has gone to work to help young people, as future voters, think through a fiscal lens.

Thinking through a Fiscal Lens: Separating Fact from Fiction

One of the most difficult challenges I’ve had in running a program about fiscal responsibility during a time of popular stimulus packages and tax cuts is knowing how to separate the economic rationale from the politically motivated. There are a few key characteristics of solid fiscal thinking that I’ve observed over the past 5 years working on Up to Us: Fiscal thinking is the ability to think in tradeoffs. Take the climate crisis. Fiscal thinkers will ask themselves “What is the cost of addressing the climate crisis now, versus the opportunity cost if we don’t take action now or very soon?”

Fiscal thinking is the ability to think in timeframes and demographics. Take Social Security. It’s design relies on having enough workers who are paying into it to support the number of beneficiaries. Due to the fact that people are having fewer children and the Baby Boomer population is living a lot longer than when the Trust Fund was originally enacted in 1935, the worker-to-beneficiary ratio has fallen from 5.1 in 1960 to 3.3 in 2005. The ratio is projected to decline further by 2040, presenting hard policy choices for lawmakers.

Put simply, fiscal thinking is applying critical thinking to managing taxpayer money. And each of us already knows how to do this. We make choices that will help save us money in the long-term, even if it means spending more today. We choose to tighten our spending belts when our income flow is lower than usual. We “think fiscally” with our own money everyday. Why not with our tax dollars?

So what’s in store for Up to Us as we embark on our tenth year of existence? Guided by our core values and inspired by the generation who has shattered voter turnout rates, we will deliver on what we believe the country so desperately needs right now: the space for dialogue, principled disagreement, and civic engagement centered around a sustainable economy the next generation believes is possible. 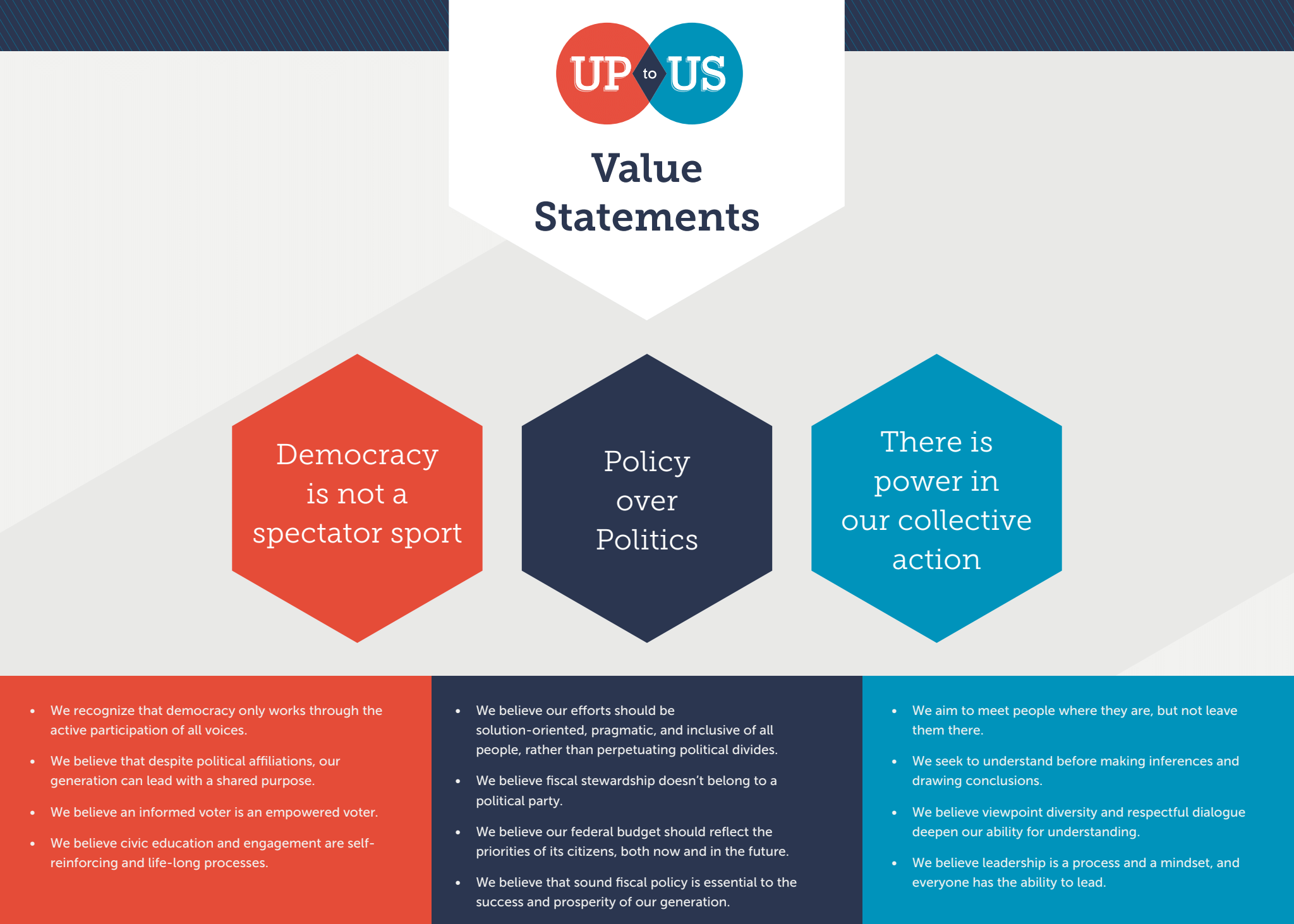 About the Author: Hilary Allen is the Program Manager of Up to Us, a national, non-partisan program aimed at developing next-generation leaders to raise awareness and generate conversation around our most pressing economic and fiscal challenges. Since 2016, she has led the national Up to Us Campus Competition in empowering young people to understand the implications about the long-term national debt through embracing civil dialogue, leadership development and next-gen civic engagement. Hilary is an alumna of the University of Illinois, Urbana-Champaign where she participated herself in the Up to Us Campus Competition in 2015.