Civic Personalities in the Real World: In this series, we’re highlighting some of our amazing Up to Us alumni who are actively using their skills and energy towards advocating for a variety of issues. These changemakers took our Civic Personality Quiz to find out their personality, and how it connected to their life and work! 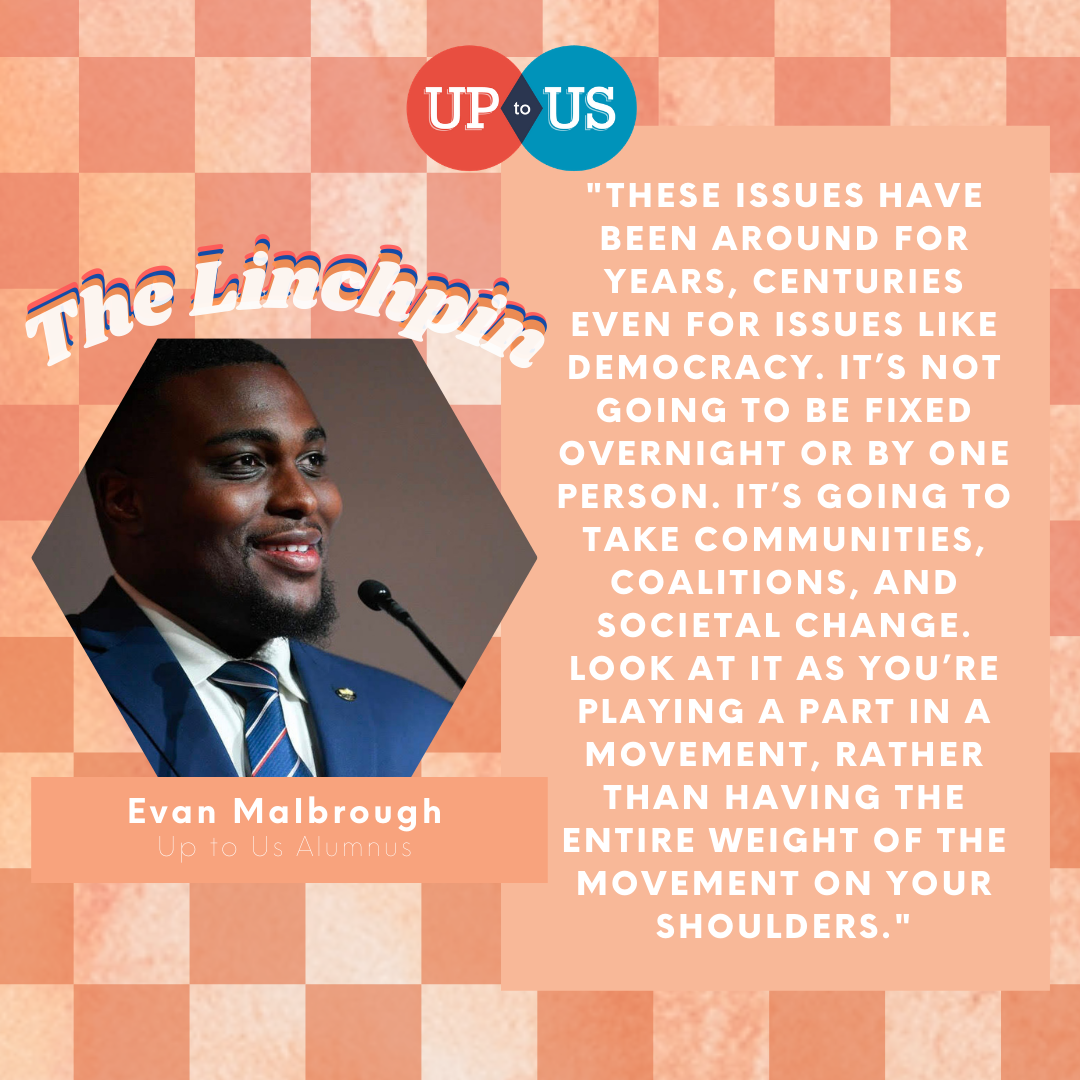 Tell us a little bit about yourself

My name is Evan Malbrough, I’m a native of Smyrna, Georgia, and I’m a graduate from the Georgia State University, Andrew Young School of Policy Studies with a degree in Public Policy and a minor in Cello Performance. I am the founder of the Georgia Youth Poll Worker Project, a nonpartisan nonprofit geared towards recruiting young people to be election workers for their federal, state, and municipal elections. I’m also a writer and publish on issues such as race, politics, and access to democracy.

You’re a Linchpin - what does this mean to you?

I became an activist because I saw the work of my heroes and wanted to walk in their footsteps. Growing up in Atlanta, I didn't just read about the life and work of people like Andrew Young, John Lewis, Rev CT Vivian, and Rev Joseph Lowery, I actually heard them speak all the time as a child. Their words inspired me to be an organizer so every day, when I go to work in my community, I work within their legacy. I also am inspired by heroes I never met like Andrew Goodman & James Baldwin who inspired me to be a voting rights activist and writer.

It’s very interesting! Policy studies cover everything from politics to program building to city planning - it’s a very diverse topic and very project-based, which is something I gravitated towards. When it comes to voting, I was really attracted to the idea of democracy and giving people a voice. Living in the legacy of the people that I look up to, whether that be John Lewis, Andrew Goodman, and other people who did a lot of voting rights in the 60s and on.

[On his first experience with civic engagement] I was a Cub Scout originally and became a Boy Scout once I got into sixth grade. I was doing a lot of community service work - part of our work was attending meetings and holding leadership positions in order to get the Eagle Scout, which I eventually got. It was those things that helped me to lay the foundation: learning about leadership, the cores of community service, personal accountability, as well as how to survive in the woods.

[On his experience with getting involved on his college campus] I came into Georgia State during the 2016 election in August of 2016. It was basically a way to make money when I would canvas for local and state candidates on the weekend as a broke college student. When doing the work, I really started to like it and ended up joining my local Young Democrats chapter. By sophomore year, I was starting Vote Everywhere with the Political Science department.

Why should college students be interested in civic engagement?

What’s the most difficult thing about getting college students involved with civic engagement? What do you see as the biggest difficulties going forward (with the COVID-19 pandemic in mind)?

Getting faith in the system, and that’s understandable. If you look at our generation, Generation Z, our childhood was marred by the 2008 financial crisis, and as we progressed into adulthood we have the COVID-19 pandemic and the financial crisis after that. In between, you have mass shootings, huge conversations about things like health care, incarceration, police brutality. Rightfully so, a lot of young people don’t feel like the system was built for them or that they can gain a state of protected apathy.

What issues are you most passionate about? What would you like to do for this issue in the future?

Voting, absolutely. I literally built my career, writing and professionally, off of it. I think there are so many sectors in our democracy that are so antiquated, and the reason why they’re so antiquated is because they keep Black and marginalized communities out of the ballot boxes.

One of my goals is to help bring democracy into the new era with innovation. For example in Georgia, if the election is on November 3rd, between August 10th and August 31st, you can vote anywhere in your county with no hassle at all. On November 3rd you have to vote at your precinct. You’re literally seeing a newer, easier way to run an election, and then a very antiquated way to run elections on the actual election day. Those require two different systems and two different logistical practices. Things like those - changing how we do elections, and how we allow people to have access to ballots.

I’m very interested in things like experimental democratic practices, like participatory budgeting which merges economics and democracy, where people can vote on certain sections of their local budget.

[On his work for the upcoming state and local elections] (I will be) Recruiting young poll workers and creating pipelines for them to work in those local elections. They can get paid, and cities can expand their capabilities to open precincts, especially in marginalized communities. Other than that, I plan on writing more about democratic issues, hosting events and seminars that educate young people on local elections and their importance, and participating in voter registration.

What advice would you give your generation if they’re interested in getting involved with civic engagement?

I would say start small and build yourself up. I remember in college I would host voter registration events knowing like 2 or 3 people would come. You have to have tough skin to get people on board. Find something you’re passionate about, and something you’re willing to fall before you start flying with. And then, be willing to adapt.

For example, the Georgia Youth Poll Worker Project was an adaptation of my voting rights work. I used to just do voter registration and voter information, but I realized there was a huge deficiency in election work, especially when advertising towards young people. I shifted to start that project to fill that gap. I’m still a voting rights activist - I just went into a specialty. It’s like how someone can train to be a doctor, but have a specialty they work in. Don’t feel like you have to do what everyone else is doing. You can find your own niche to advocate for, while maintaining yourself in your field.

Make sure you take care of yourself. Don’t feel like it’s your obligation to change something by yourself, and that only you can do it. These issues have been around for years, centuries even for issues like democracy. It’s not going to be fixed overnight or by one person. It’s going to take communities, coalitions, and societal change. Look at it as you’re playing a part in a movement, rather than having the entire weight of the movement on your shoulders.

Check out the amazing events that Evan has planned with the Georgia Youth Poll Worker Project during the summer!

We’re doing a 6-part summer movie series that is centered on showing Black and POC films in the Atlanta, Georgia-metropolitan area. We’re doing events to have fun and build community.