What is the Economic Outlook for 18- to 24-Year-olds after Graduation?

In 2018, a majority of high school graduates between 16 and 24 were enrolled in college. The enrollment rate of this age group was 66.9% for men and 71.3% for women. Young adults are more educated than previous generations and more than 19 million of them were enrolled in college as of fall 2018. That generation will enter a job market with a low unemployment rate, but is their long-term economic outlook like?

Employment prospects are on the rise 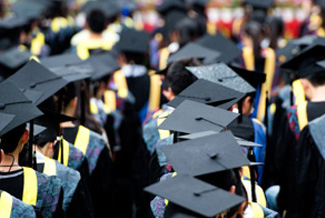 Employment prospects are overall improving for college graduates. Employers are expected to hire 13% more college graduates in 2018 compared to 2017. This trend is likely to continue since employers are talking about growth in the labor market that hasn't been seen since the 1970s.

While this trend may continue, it is not uniform. It is being heavily driven by industries like IT, healthcare and professional services.
This means that a student's major has a lot to do with their employment prospects. The IT industry was expected to hire 60% more graduates in 2018 compared to 2017.

It's important to counterbalance rising employment prospects with another trend. Underemployment is a common issue for recent graduates.

While IT majors are likely to find job prospects adapted to their education level, 54% of psychology majors get a first job that doesn't require a college degree. Five years later, 38% of them are still underemployed.

Degree inflation is another phenomenon linked to underemployment. Some employers add a college degree as a requirement for positions that don't require this level of education. Degree inflation is difficult to quantify but it's a trend that may hide a higher percentage of recent graduates who are technically underemployed, even though their job description mentions a college degree.

There was a slight salary increase of 2.8% on average for recent graduates between 2017 and 2018, though the overall trend is that a graduate's starting salary is below their expectations. This is a trend that aligns with underemployment.

It's possible that starting salaries will keep increasing for recent graduates, especially as hiring grows in some fields like IT, healthcare and professional services. However, wage stagnation is a reality for graduates and everyone else. For a majority of U.S. workers, wages haven't changed much over the past decade.

Starting salaries vary based on geographical location. Recent graduates in fields that are seeing growth in hiring and who are willing to relocate are more likely to secure a higher starting salary.

Student loans are going to affect the economic outlook of 18- to 24-year-olds who are currently in college. It's estimated that the amount collectively owed by young adults in student loans will reach $2 trillion by 2021. This amount reached $1 trillion in 2012 and is growing at an increasingly rapid pace. 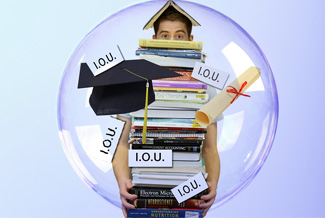 The collective amount of student debt owed is increasing because more students are graduating from college and interest costs are adding up for young adults who have been in a workforce for a few years. Individual loan balances are also higher since tuition and other costs are increasing. Students who are entering college now are more likely to see a more significant increase in costs.

In 2017, the average undergraduate student finished college with a little under $40,000 in debt. Students who are currently enrolled in college will likely owe more; between 2008 and 2018 tuition and fees have been increasing at an average of 3% annually for private nonprofit four-year institutions.

Those trends are linked to millennials entering the job market during a recession. However, student loans are contributing to this phenomenon.

Increased real estate prices make it more difficult for millennials to purchase their first home. In 2016, 15% of 25- to 35-year-olds still lived at home with their parents.

While today's 18- to 24-year-olds won't be entering the workforce during a recession, student loans and the high cost of home ownership could cause these millennial trends to carry over to this group.

Rising healthcare costs are another economic reality. In 2018, healthcare costs increased by 5% on average.
Patients are seeing higher out-of-pocket costs as well as increased medication prices. The cost of managing chronic conditions is going up, and so are ambulatory care costs. There is a widespread issue that healthcare professionals are acknowledging a lack of transparency when it comes to costs and billing that is contributing to more expenses for patients.

College students could see healthcare costs keep increasing throughout their lifetime. Some of those young adults will also have to cover healthcare and senior living facilities costs for their aging parents. Those costs are expected to increase as life expectancy increases for everyone. 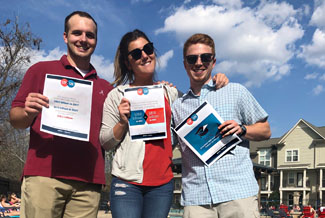 The 18- to-24-year-old group has some advantages over previous cohorts of graduates since they won't enter the job market during a recession. There are some exciting employment opportunities for graduates willing to relocate, and some fields are hiring at a pace that hasn't been seen in decades.

However, the long-term economic outlook of young adults is limited by stagnating wages, slow economic growth, debt and the increased costs of healthcare and home ownership. Those are issues It's Up to Us has been raising awareness about. We can build a better future by adopting more responsible fiscal policies that would foster sustainable economic growth and a better outlook for everyone.