“What makes America strong is our willingness to build and leave a better future for the next generation,” Peterson said. 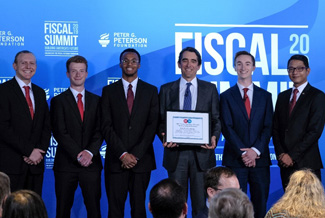 The next generation was well represented at The Peter G. Peterson Foundation’s 2019 Fiscal Summit, held at the Newseum in Washington, D.C. on Tuesday, June 12. The Fiscal Summit brings together leaders, experts and policymakers – and college students representing the finalists and winner of the annual Up to Us campus competition – to discuss how to build a sustainable fiscal future to put America on a path for prosperity, leadership and growth.

This year, 25 college students representing Up to Us were in attendance, and the winning team, Oakland University in Rochester, Michigan, was joined by Peterson on stage at the Summit. Led by Nathan Pigott (Class of 2020), the Oakland team came up with a national debt awareness campaign using fitness as a theme.

What made Oakland University’s Up to Us campaign a winner? 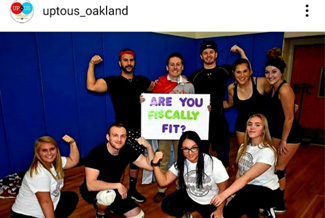 The Oakland University team partnered with dozens of OU student organizations to expand their reach and engaged hundreds of students on the national debt through voter registration drives, classroom presentations, media partnerships and creative events. The team integrated the idea of being “fiscally fit” into their conversations and presentations.

The executive director of the Oakland Up to Us team and pre-med student (class of 2019), Joseph Javier’s enthusiasm for the Up to Us campaign and the national debt is driven by his interest in healthcare. “I’m pursuing a career in pharmacology, so it’s important for me to understand how the national debt, and our generation’s ability to invest in our healthcare systems and the well-being of our population, will be impacted,” Joseph said.

The Oakland team created a boot camp that allowed students to test their physical fitness before taking a fiscal fitness test; held a pledge signature drive that used a giant beach ball as a visual representation of inflation; and led a national debt awareness parade through the Oakland campus.

For the finale, the team hosted an Ultimate Fiscal Fitness Challenge featuring a gameshow-style competition between student leaders, allowing them to show off their new-found fiscal knowledge and explain why young people should care about the national debt.

And, the Oakland team engaged students outside of the classroom by attending university and local sporting events, the gym, dance events, martial arts exhibitions and even on local roads (in homage to the Motor City) where students and other young Americans would least expect to have conversations about America's economic future.

Their creative theme and innovative partnerships and activities caught the attention of this year’s judges and earned Oakland University the top spot in this year’s Campus Competition. Congratulations to the winning team and to all the finalists of this year’s Up to Us campus competition!

To learn more about how to get involved in the movement, or to register a team to participate in the 2019-2020 Campus Competition visit www.itsuptous.org.