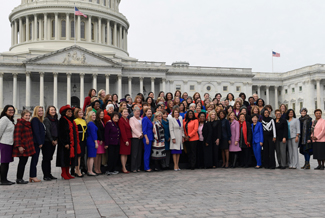 Just like the Up to Us movement, which is comprised of people from all different backgrounds and academic degrees, the 116th Congress proves there isn’t one set career path you need to take to run for office. From NFL players to ocean engineers, these elected officials demonstrate that there are no barriers to civic engagement and any “road” or career path can lead to Capitol Hill.

Rep. Collin Allred (D – TX – 32) former NFL linebacker
Born and raised in North Dallas by a single mom, Congressman Colin Allred earned a full-ride football scholarship to Baylor University. Upon graduation, Allred played four seasons for the Tennessee Titans, before returning to Texas to pursue a law degree. Allred served in the General Counsel’s office at the U.S. Department of Housing and Urban Development and later returned home to Dallas, where he decided to run for office to represent the district he grew up in. Coincidentally, Allred isn’t the only former NFL player serving in the 116th.

Rep. Anthony Gonzales (R – Ohio – 16) former NFL receiver
Congressman Anthony Gonzales grew up in Northeast Ohio, where he played football at St. Ignatius High School. He earned a scholarship to play football at The Ohio State University and after a successful college season, Gonzales went on to play five years in the NFL for the Indianapolis Colts. After a lifetime in and around Northeast Ohio, Gonzales went to Stanford University to pursue his MBA. Gonzales is currently serving his first term in Congress and has pledged to be a “conservative problem solver.”

Rep. Alexandria Ocasio-Cortes (D – New York – 14) former waitress and bartender
Congresswoman Alexandria Ocasio-Cortes, more commonly known as “AOC,” was born and raised in the Bronx. She worked as a bartender in Manhattan and as a waitress in a taqueria before gaining national attention when she won the Democratic party’s primary election for New York’s 14th Congressional district in June 2018. Ocasio-Cortes also worked as an organizer for Senator Bernie Sanders and for the nonprofit, National Hispanic Institute.

Rep. Mark Walker (R – NC – 6) former pastor
Congressman Mark Walker worked as a pastor for almost two decades before following a new calling on Capitol Hill. Walker has lived in the Piedmont-Triad of North Carolina for almost three decades and prior to running for office, held a number of rolls as a pastor, including directing musical productions and leading overseas mission trips.

Rep. Sharice Davids (D – Kansas – 3) former mixed martial arts (MMA) fighter
A native of Shawnee, Kansas, Congresswoman Sharice Davids graduated from the University of Missouri -Kansas City in 2006. That same year she began her career competing in mixed martial arts (MMA). In 2013, Davids went professional. She has a 5-1 win-loss record as an amateur and a 1-1 record as a professional. Davids earned her J.D. from Cornell Law School in 2010 and directed community and economic development for the Pine Ridge Indian Reservation.

Pete Stauber (R – Minnesota – 8) former NHL player
Congressman Pete Stauber, a native of Duluth, played hockey throughout high school and college. As team captain, he led his college team to a Division 1 National Championship and went on to play for the Detroit Red Wings Organization. Stauber has also worked as the St. Louis County Commissioner, City Councilor in Hermantown and as a Duluth police officer.

Rep. Jahana Hayes (D – Connecticut – 5) former teacher
Congresswoman Jahana Hayes is no stranger to American government. She worked as a government and history teacher at John F. Kennedy High School in Waterbury, CT, prior to serving in Congress. She chaired the Kennedy SOAR Review Board, a “school within a school” that provided advanced instruction for gifted students. She was also a co-advisor of HOPE, a student service club at Kennedy. In 2016, Hayes was named Connecticut’s Teacher of the Year and went on to win National Teacher of the Year.

Rep. Ted Yoho (R – Florida – 3) former veterinarian
Congressman Ted Yoho earned his bachelor’s degree in Animal Science from the University of Florida in 1983. He stayed in Florida to attend the University of Florida College of Veterinary Medicine. Yoho worked as a Veterinarian and small business owner in Florida for 30 years before pulling a major upset against long term incumbent, Congressman Cliff Stevens. Yoho is still a member of the American Veterinary Medical Association, Florida Veterinary Medical Association, Florida Association of Equine Practitioners and the Florida Cattlemen’s Association.

Rep. Joe Cunningham (D – South Carolina – 1) former ocean engineer
Congressman Joe Cunningham graduated from Florida Atlantic University with a Bachelor of Science. He remained in Florida for five years working as an ocean engineer. When he was laid off during the 2008 recession, he enrolled in law school at Northern Kentucky University.  Cunningham is the first Democrat to represent this Charleston-based district since 1981.

Inspired by these lawmakers and looking for ways to become more civically engaged in your community? Visit the get involved section of our website to learn more about how you can sharpen your leadership and organizing skills and join the movement!