Fiorella Riccobono, a student from Florida State University and Up to Us team leader wrote an op-ed published in Quartz during the 2016-2017 Campus Competition, questioning how Trumps proposed budget would affect millennials. Returning as a team leader for a second year in the 2017-2018 competition, Riccobono admits fiscal and economic issues affecting our generation has become a passion.

Riccobono was invited by CNN to attend October 18, 2017, CNN Debate Night with Senator Bernie Sanders and Senator Ted Cruz, which focused on the GOP Tax Plan. When it was Fiorella's turn to address the senators, she asked "Recent projections estimate that the tax framework currently under consideration would add $2.4 trillion to the debt over the next 10 years. What steps will you take to ensure that tax reform doesn’t add to the debt burden my generation is already facing?" Sen. Ted Cruz took to the microphone first stating that "the only force big enough to turn the debt around, is economic growth." 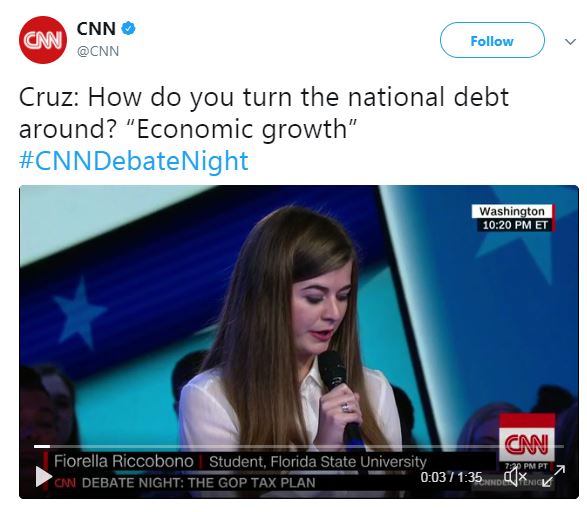