As an economics major, I have heard about the national debt on multiple occasions. However, nowhere in all of my studies have I spent time actually critically analyzing the repercussions of the national debt – it was just a fact that I memorized and accepted as a state of being. 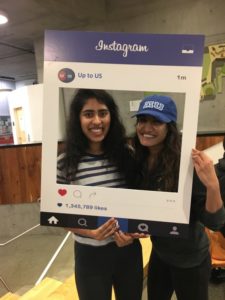 It wasn’t until I started looking through the materials the Up to Us coordinators sent out that I actually started to piece together the cause and potential effects relationship. In the coming days as I was deciding whether I wanted to pursue the Up to Us campaign or not, I had conversations with friends and classmates about some of the preliminary impacts I started to look into with regards to the national debt. Everyone I spoke to was bewildered by the fate of the country as it relates to the debt and their complete lack of understanding about a topic that will drastically affect their adult lives. A few people from some of those initial conversations expressed interest in learning more which served as the point of inception of the Berkeley Up to Us team.

I had people on my team who had put on TEDxBerkeley and culture shows so I thought it would be easy to engage our campus through our Up to Us campaigns, but it proved to be quite difficult. The difference between TEDxBerkeley, culture shows, and an event about the national debt is that people aren’t begging to come to an event that has to do with something as unglamorous as policy and convoluted political decisions. People on our campus, especially during the Up to Us campaign time, were feeling especially defeated after the November 2016 election results and compounded with the colder than usual spring time, getting people to come to our events felt like an obstacle rather than a result of hard work.

After My Two Cents Day, which we left open to the public, we found that one of the main reasons we were having trouble engaging the campus was because my team members and I were lacking ethos. Students on campus didn’t have the time to spend conversing with us at our booth long enough to get past the general facts that highlighted staggering quantitative statistics and left them uninterested. If those statistics were coming from a professor or someone they respect in a format that was more lecture-like, it seemed that they would be more interested. Based on this feedback our team devised a plan to contact student organizations on campus, relevant to business, economics, or politics, and request that they work with us to fit national debt content into one of their meetings. This way, the information we were trying to spread didn’t feel invasive but rather seamlessly integrated into what they were already passionate about. Plus, since it came from their president rather than random students, they were much more receptive.

Overall, working on the Up to Us campaigns really tested, energized, and excited our team. Up to Us helped us learn about a topic that will shape our future while training us to work as a team. We encountered quite a few hiccups but we problem-solved together and came up with creative ways to get across a seemingly unappealing message, pretty successfully!

We are ready for the challenge again next year!