What does our fiscal future look like under President-Elect Trump?

As we look to welcome a new administration to Washington this January, it is important to understand what fiscal and economic policies and administration roles are coming into focus at the start of the New Year.

Appointments for key fiscal policy roles include Secretary of the Treasury (read: head of all things money including tax policy, public debt management, the production of currency and coins, etc.) which under the Trump Administration will be headed up by Steven Mnuchin. Another key role is the Secretary of Health and Human Services (read: the person concerned with all health matters for the United States, i.e. welfare, Medicare, income security programs, etc.) which will be led by the six-term congressman, Tom Price.

Based on President-Elect Trump’s proposed fiscal agenda and his current cabinet appointments, the following fiscal and economic issues are on the table:

The above policies, issues and appointments mean potentially big changes for Americans and major implications on our nation’s debt. Remember, we are still waiting for Congress to set the 2017 budget.

If you are looking for a way to get involved and let your voice be heard on the fiscal issues you care about, sign the Up to Us pledge and tell your elected officials that our fiscal future is important to you and ask them to act responsibly on our country’s behalf.

Looking to do more? Get involved with Up to Us in the following ways: 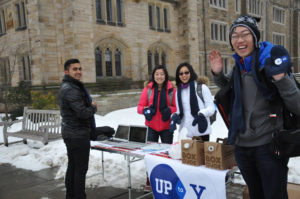